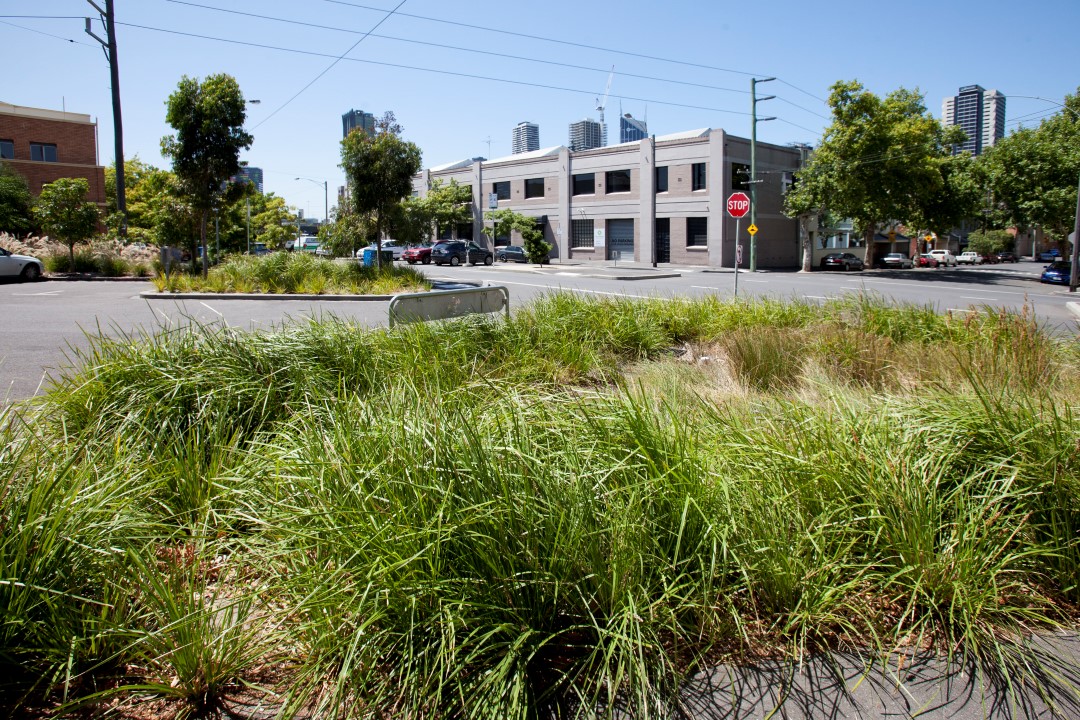 The raingardens on Howard Street intercept stormwater from the road and clean it before it enters our waterways.

Howard Street is a short residential street in North Melbourne. In 2011, the City of Melbourne closed part of the road and turned it into parkland.

We placed two large raingardens at the intersection of Howard and Rosslyn Streets. They capture water running down the gutters on Howard Street, before it reaches the stormwater drains. The third raingarden captures runoff from William Street. 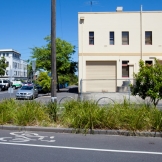 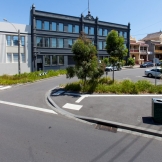 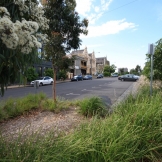 What benefits have the raingardens provided?

Howard Street slopes down between William Street and Rosslyn Street. We built two new raingardens at the low end of Howard Street. When it rains, the gardens capture water running off the road before it enters the stormwater drains. The water pools in the garden beds and gradually soaks down through the sandy soil.

The raingardens are planted with wetland grasses and look like standard garden beds. Beneath the surface they are made up of several layers of substrate. These are designed to remove litter and pollution from stormwater.

The bottom layer is called the drainage layer. It allows the clean water to drain from the garden bed and back into the stormwater system, eventually flowing into the Yarra River. 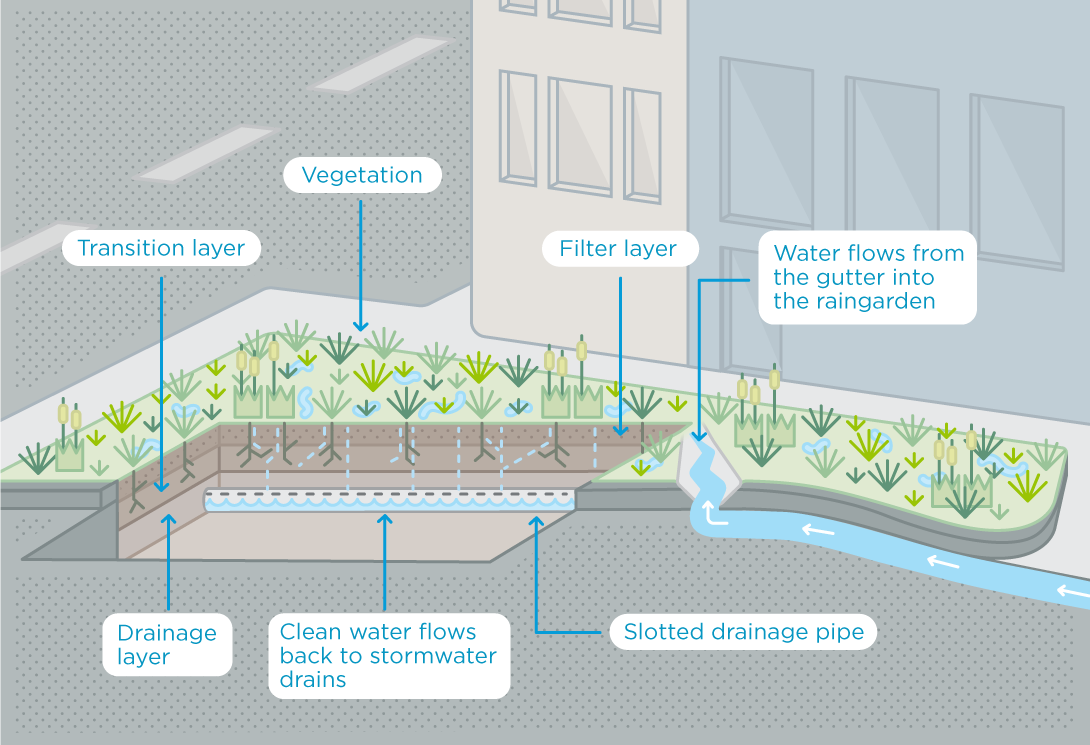 Beneath the surface of a raingarden, special layers of sand work to remove pollution from stormwater.

The raingardens in Howard Street were part of broader streetscape redevelopment that cost a total of $1.5 million.

The following tasks were completed during the research and planning phase of the project.

Because the redevelopment of Howard Street involved turning some of the street into parkland, we did a traffic study to understand the impact of such change. We also investigated traffic volumes prior to the design process to support the business case for closing part of the road.

MUSIC modelling was carried out to help determine the size and location of the raingardens.

To aid the community consultation, we developed concept designs. The designs were refined based on community feedback.

This was the first time we used the Biofilta planting system, where mature plants are pre grown at the nursery in large format modules. The modules arrive on site with 100 mm of loamy sand thick with plant roots. We placed these close together in the raingardens, on top of 400 mm of filter layer sand.

The advantages of this type of installation:

We engaged extensively with the community about our plans to turn some of the underused section of Howard Street into parkland. In response to community feedback, we added the raingardens to the original park design.

You can download the concept plan used for consultation at the top of the page.

Each raingarden has four layers; the plant modules, a filtration layer, a transition layer and a drainage layer. Each of these are detailed below.

Purpose: this is where all the work happens. This layer filters sediments and larger litter. Phosphorous is absorbed into the filter layer. Nitrogen is removed via the plant roots and soil bacteria that exist in the filter media.

Composition: 80% Loamy Sand, 10% vermiculite and 10% perlite, by volume, evenly mixed. A layer of recycled rock aggregate is added to the top to protect the filtration layer.

Two 90 mm slotted drainage pipes are set within the drainage layer to allow excess water to flow back into the stormwater network. The pipes have a riser that allows for the flush out of any accumulated sediments. The drainage pipes connect in to the overflow pits. This allows for easy inspection of their function during rain events.

The Howard Street raingardens do not retain moisture during long dry periods. The inclusion of a submerged zone would reduce this impact as the water retained at the bottom of the raingarden keeps the sandy soil moist for longer periods. This is recommended in the Facility for Advancing Water Biofiltration (FAWB) Adoption Guidelines for Stormwater Biofiltration Systems.

We have had to replant the raingardens, as extended dry periods have resulted in some plant losses.

The plant modules are 500 mm x 500 mm x 100 mm deep with a well-established root matrix that holds together the sandy soil. These modules are installed like tiles close to one another across the level surface of the filter layer.

Position: planted throughout the raingardens

Purpose: the biofilm on the plant root system removes nutrients from the water as it soaks through the raingarden

In addition to the grasses, the banks were planted with Lomandra longifolia and a tree was planted in one of the raingardens as a feature to tie it in to the surrounding landscape.

The pre-grown plant modules make the system look well established from day one.

Overflow pits have been installed 100 mm above the surface of the raingarden. In heavy rain, excess water will bypass the raingarden and flow directly to the stormwater system. 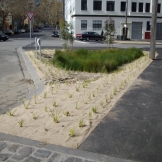 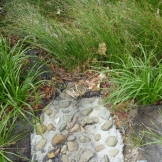 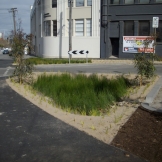 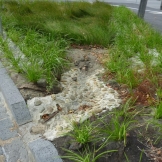 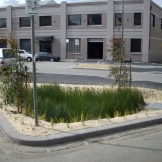 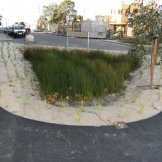 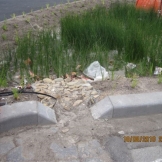 The municipality of Melbourne covers 3766 hectares at the bottom of the Port Phillip Bay catchment. Three major waterways passing through the municipality: the Yarra River, Maribyrnong River and Moonee Ponds Creek

The Growing Green Guide provides all the information you need to know about green roofs, walls and facades.

The Total Watermark Strategy guides the implementation of sustainable water management across the city.