The Trin Warren Tam-boore wetland has been constructed in Royal Park, four kilometres north of Melbourne’s central city. The five-hectare wetland takes stormwater from surrounding suburbs, cleans it, and stores it to irrigate the park.

Spanning 170 hectares, Royal Park is the largest and most unique parkland in inner city Melbourne. Set aside as a reserve in 1845, Royal Park is known for its remnant native landscapes, wide variety of sports fields and large spaces for recreation. It plays an important role in ensuring that indigenous flora and fauna are retained in the inner city. This includes the endangered skink population in the park’s west.The system consists of two linked ponds or wetlands – an S-shaped treatment wetland and a larger storage wetland. Completed in 2006, it was upgraded in 2008 to include an additional five megalitre storage tank underneath Ross Straw Field.

The Commonwealth Government funded the wetland as an environmental initiative for the 2006 Commonwealth Games. Melbourne Water also provided funding through the Living Rivers program. 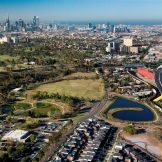 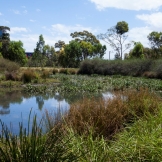 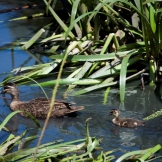 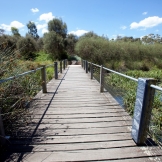 What benefits has the wetland and stormwater harvesting system provided? 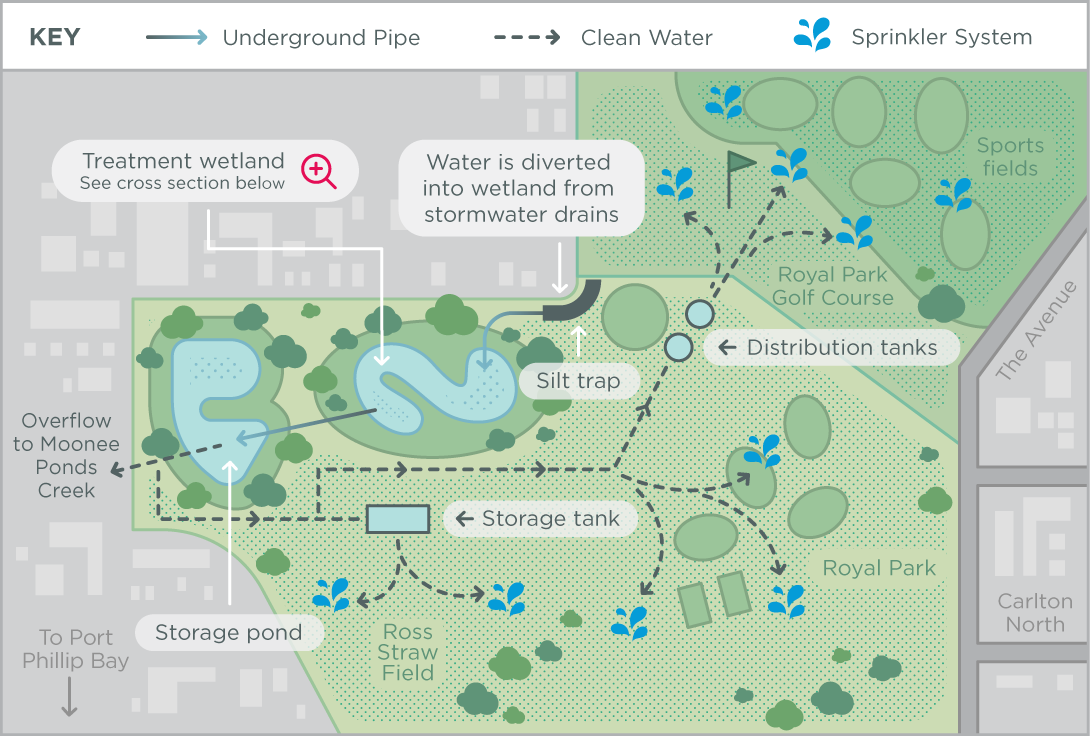 less than $2 per kilolitre

The wetland takes stormwater from surrounding suburbs and processes it to Class A standard – safe for human contact but not drinking.

The plants, microorganisms living on their stems and the pond sediment all treat the stormwater by absorbing nitrogen and other pollutants. The treated water flows through pipes under Oak Street into the storage wetland. Water to be used for irrigation is passed through an ultra violet disinfection unit. The excess is returned to the drainage system, which flows under the Tullamarine Freeway into Moonee Ponds Creek. 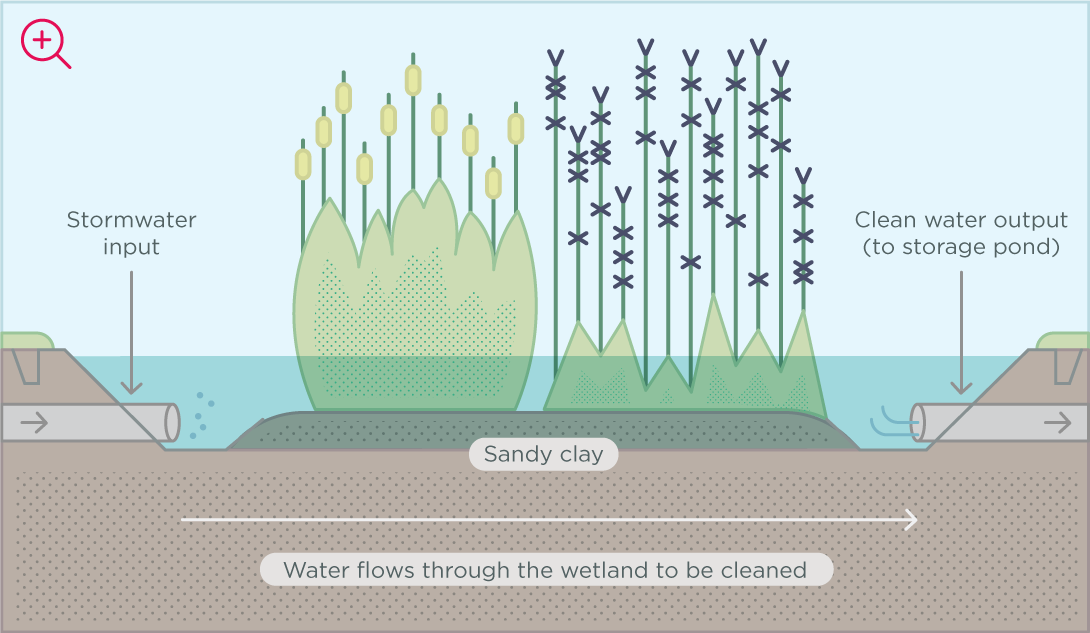 This was a large-scale project that required a range of skills and consultants to complete. In addition to in-house experts at the City of Melbourne, we worked with external designers, engineers and landscape architects to complete this project. We also worked closely with our funding partner, Melbourne Water.

Total: $8,140,000 over six years, including several upgrades to the system

The Royal Park Master Plan was completed and endorsed by the City of Melbourne in 1997. It recommended the construction of a wetland system in the west of the park to provide a reliable water source for irrigating the sports fields. The Master Plan also noted that creating the wetlands would increase amenity and restore indigenous vegetation.

Soil contamination testing was undertaken and revealed asbestos. Removing the asbestos caused delays and increased the cost of the project.

[simple_tooltip content=’Model for Urban Stormwater Improvement Conceptualisation (MUSIC) is a stormwater-modelling program. It is used to test the likely effectiveness of different stormwater treatment systems in a given setting, based on rainfall data, hydrological information and water pollution readings.‘]MUSIC[/simple_tooltip] modelling

Constructing a wetland in Royal Park was a significant change in the land use, so we carried out extensive consultation. The Royal Park Master Plan Implementation Advisory Committee, carried out the consultation. The Committee included City of Melbourne staff, stakeholders and community members. It met regularly with the Environment Protection Authority, Melbourne Zoo, the Office of Commonwealth Games Coordination and Melbourne Water.

After the construction was complete, we invited the community to help plant the vegetation in the wetland. 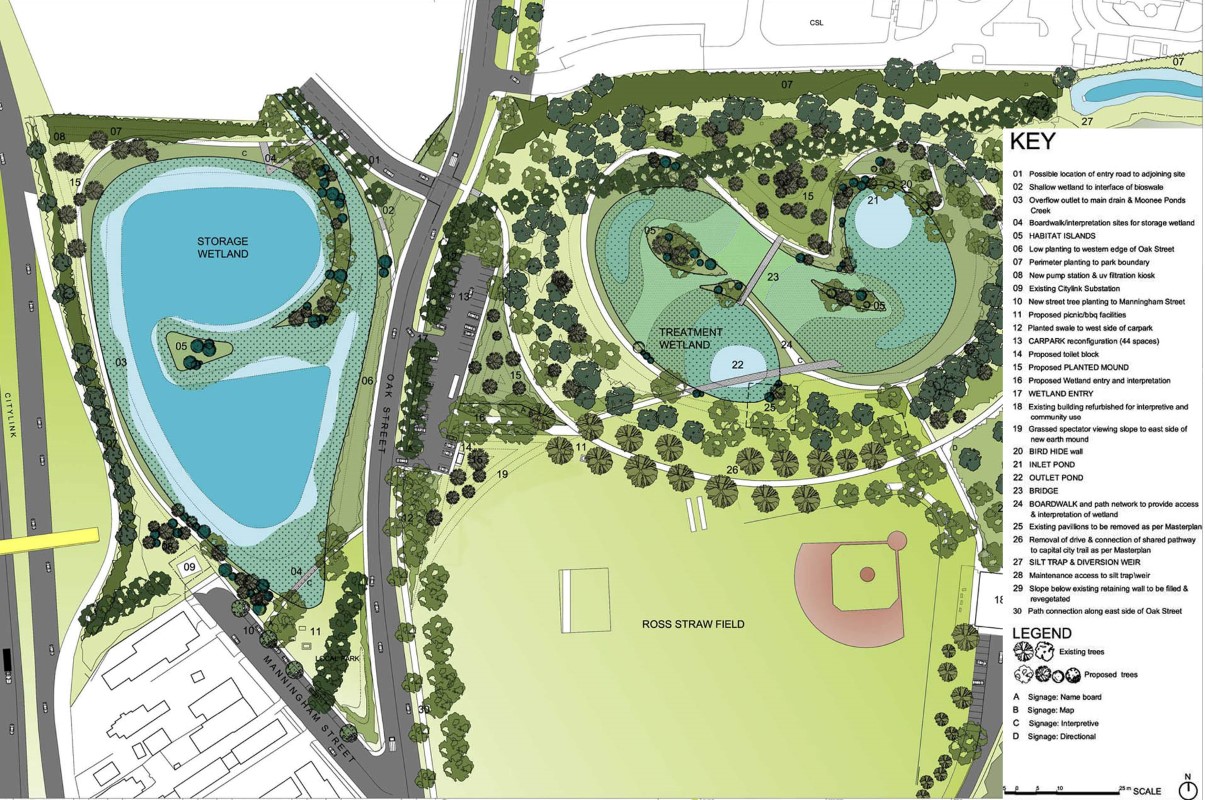 This wetland concept drawing was used during community consultation.

To improve the ecology and biodiversity of the area

By constructing a wetland as the stormwater treatment and storage method, we have actually improved the local environment. The diversity of habitat in the wetlands supports a variety of plants and animals.

The site is very close to the 2006 Commonwealth Games athlete’s village. This heightened the focus on creating a space that provides amenity as well as showcasing the Australian environment. Royal Park is a heavily used recreational area, so we also had to make sure this area was not reduced.

The wetland had fit within the footprint of the pre-existing sporting oval, and we needed to keep the mature gum trees around the oval. Under the oval was the existing main drain that connected the open Brunswick Creek to the Moonee Ponds Creek. We needed to cover the drain, so we placed the main storage pond on top of it. 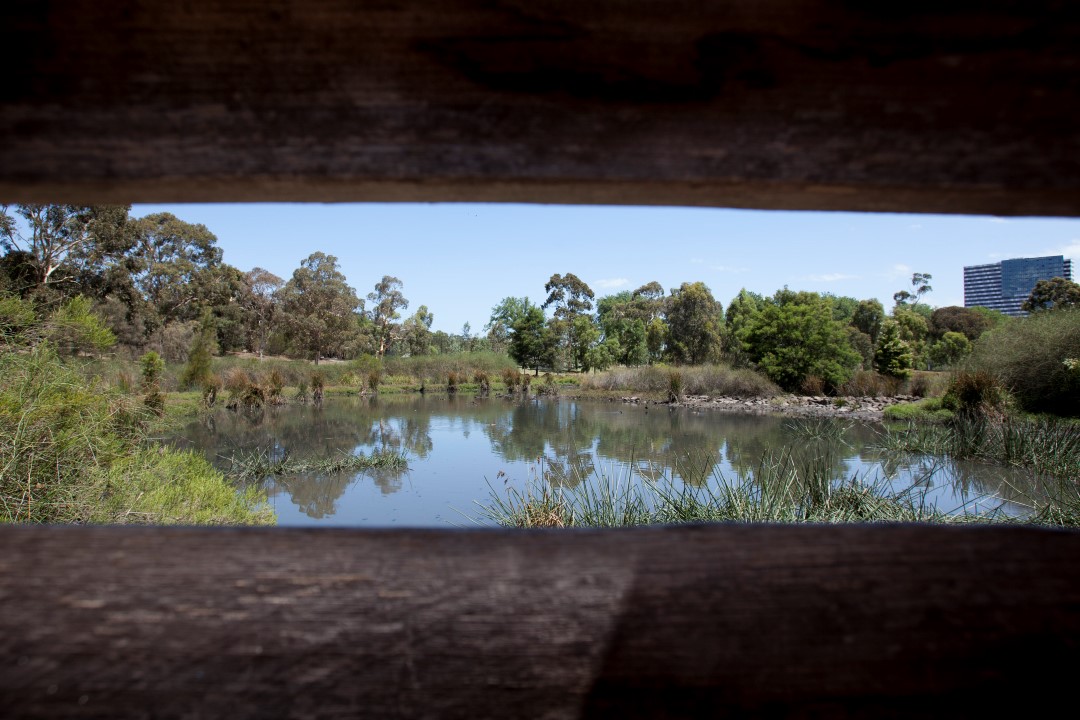 The wetland system has been designed to maximise the use of gravity for water flow, reducing the need for pumps. Pumps have a running cost associated with electricity use and also require maintenance over time. To reduce the cost of waste disposal, sediment taken out of the sediment pond during cleaning is dried on site before being transferred to a waste management facility.

Stormwater is diverted from the Brunswick Creek via an underwater diversion pipe in the weir wall. As the water slows down before being diverted, sediment and litter drop out and are retained in a sediment pond. The water gathers in front of the weir. The decrease in speed allows larger sediment to settle out. A trash rack also captures larger floating litter. Larger flows go over the weir and continue down the pre-existing main drain into the Moonee Ponds Creek.

The trash rack is inspected regularly to ensure that large debris is not blocking the water flow or adding pollution to the water. Additional inspections are carried out following major storms because there is a greater likelihood of blockages caused by debris at these times. The S-shaped wetland is the main treatment element in the stormwater harvesting system. Water flows from the diversion point and passes through the wetland, where sediments continue to drop out or are trapped by the vegetation and removed by the microorganisms.

The S-shape has been designed to gain the maximum flow distance for the water while keeping the system’s footprint to a minimum. The design replicates a [simple_tooltip content=’a branch of a river forming a backwater or stagnant pool, made by water flowing from the main stream during a flood’]billabong[/simple_tooltip], with footbridges for pedestrians.

These tasks are performed regularly to maintain stormwater wetland and storage efficiency:

We also seek specialist advice regularly to assess the performance and wellbeing of the wetland plants. 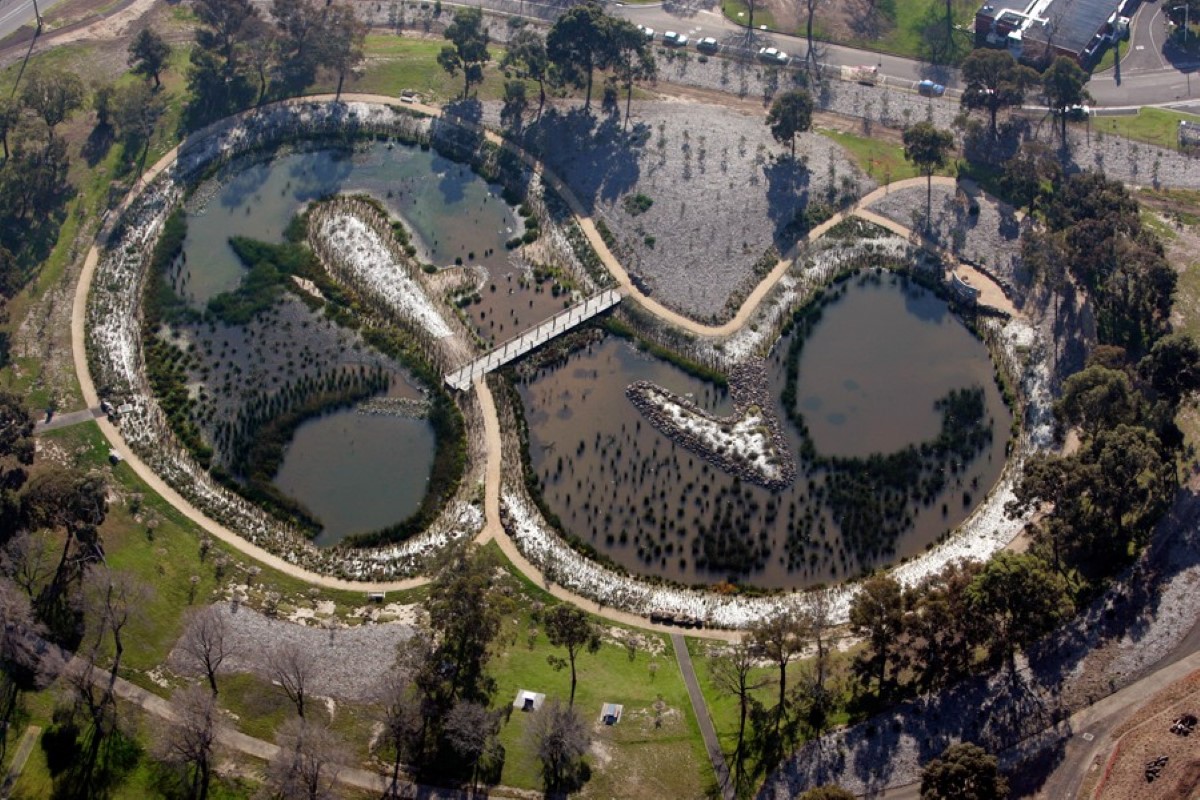 Stormwater is cleaned as it flows through the plants in the S-shaped treatment wetland.

The storage wetland is significantly larger than the treatment wetland because it stores the treated water. The design is based on an open water lagoon and contributes greatly to the biodiversity in the area. The storage wetland is excavated during construction

Location: underneath Ross Straw Field, south of the wetlands

Maintenance: The tank needs infrequent inspection because the inflow water from the treatment wetland is so clean.

The additional storage tank was added in 2008 to increase the total capacity of the system. The underground storage tank during construction 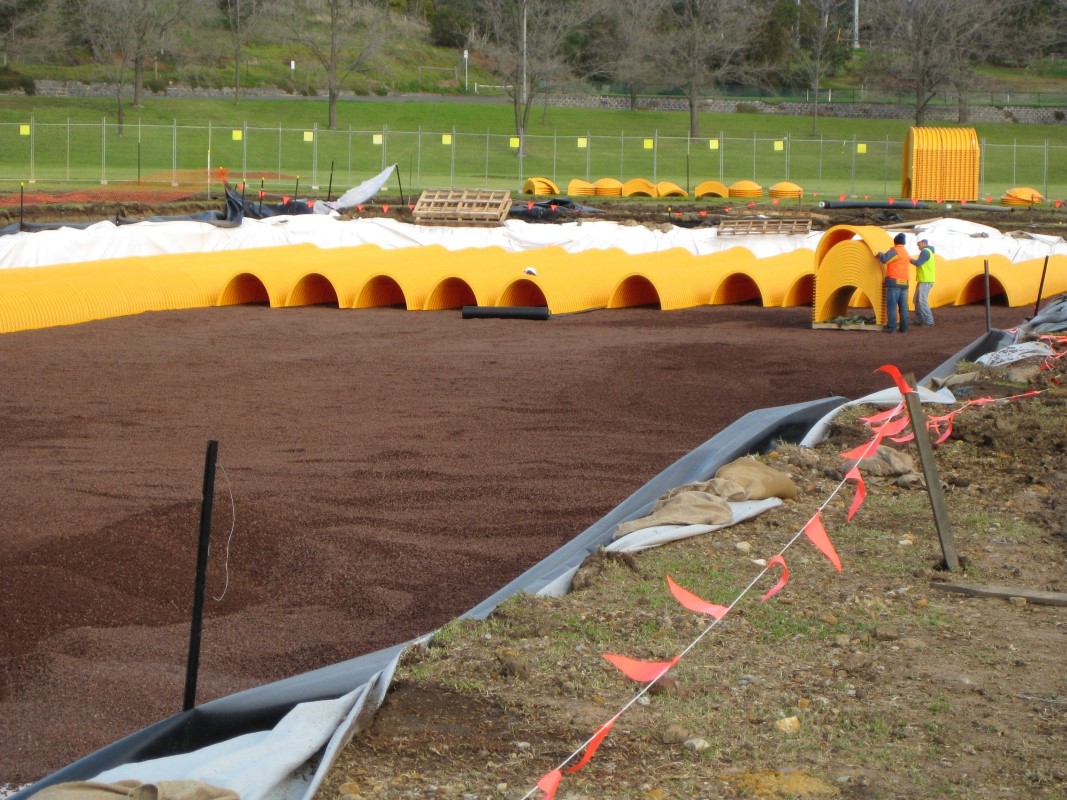 The underground storage tank is filled with arches and scoria for structural stability. This is a cost-effective method for storing water underground.

Five pumping stations move water around the system. The first pump station is located on Manningham Street, at the southern end of the storage wetland. This station takes treated water from the wetland and delivers it to McPherson Baseball Field, Ross Straw Field and to the Oak Street tank refill hydrant.

The second pump station is located at Ross Straw Field and distributes water through the irrigation network, via a vertical multistage pump.

The third pumping station is at the McPherson Baseball Field. It delivers irrigation water to:

The fourth and fifth pumping stations operate the nightly irrigation in the north and south sections of the park, and transfer water to the trees along Royal Parade. UV disinfection unit and pumps inside the pump room.

An extensive underground irrigation network transports treated stormwater from the storage wetland to a number of smaller tanks throughout Royal Park. The reticulated PVC pipework is divided into two systems, north of the tram line and south of the tram line.

For health reasons, irrigation with recycled water can only occur at night, so the water is transferred through the network during the day and stored in smaller tanks until night. By gradually transferring water to different sections of the park throughout the day, flow rates through the system are maximised.

The irrigation network operates automatically and is controlled by a central system. Our  maintenance teams monitor the central system via remote terminals (mobile devices or laptops). They alter irrigation schedules and check live water quality data from the on-line testing units. 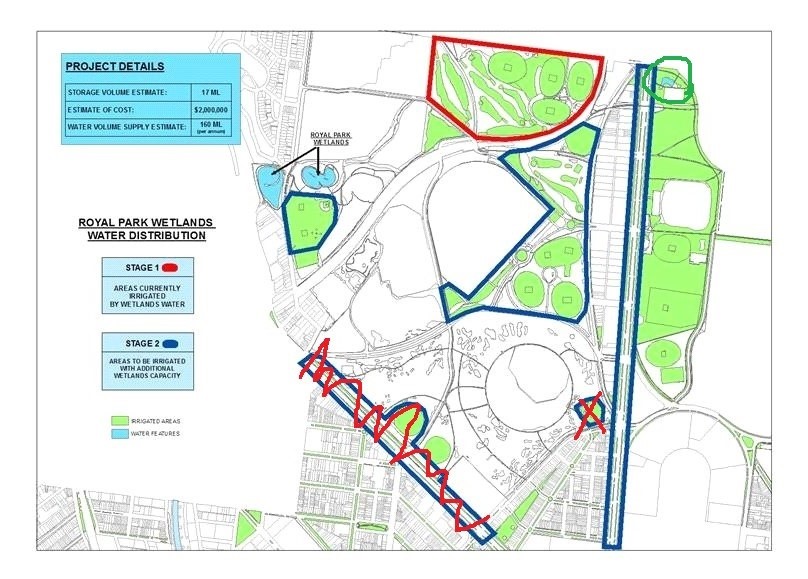 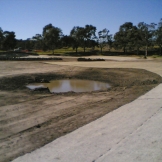 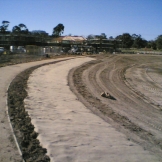 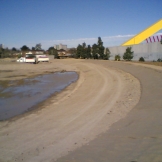 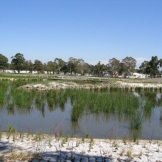 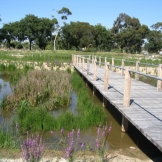 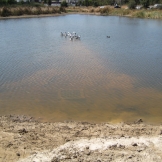 Once construction was complete, we tested that all elements in the system were functioning correctly and fixed any problems. Some of the problems that arose during testing are listed below.

Ducks eating the vegetation during establishment.

To solve this problem, we grouped sensitive plants under netting to allow establishment in the first six months.

Plants were drowning during establishment.

To address this, we kept the water level lower than the design level by not inserting the outlet control baffle into the outlet structure until the second year of operation.

Access to maintain the pumps in the wet well was challenging due to the well’s depth and configuration. Maintenance was expensive and risky.

We couldn’t replace the UV lamp because there wasn’t enough space between the units and the shed walls to pull out the lamps.

The system was reconfigured in the pump shed to allow the lamps to be pulled out the doorway.

The rising main route is walked and inspected monthly to check for leaks. If a pump continual operates or cycles (when tanks are full and no irrigation is scheduled), this may indicate a leak in the rising main.

The centralised control system is inspected daily during the irrigation season to check all sensor connections.

During the warmer months, the centralised irrigation system is monitored daily to ensure that it is functioning correctly and all parts of the park are receiving adequate water. Every three months, the sensor connections are inspected.

During normal operation the water quality is monitored on-line for turbidity, pH and salinity. This ensures that the water is fit for irrigation. Monitoring of other water quality indicators is also conducted, with expected pollutant reductions of:

Take a self-guided tour to learn more about water projects in the City of Melbourne, or explore our library of videos and animations.

A stormwater harvesting system has been built in one of Melbourne's most visited parks, allowing us to keep the space green and healthy without relying on drinking water.