As part of our Bicycle Plan 2012-16, a separated bicycle lane was scheduled for construction along La Trobe Street.

We took the opportunity to combine tree planting, passive irrigation and the separated bicycle lane into one piece of infrastructure.

It was important to incorporate the tree planting during construction. Once the bike lane was built it would be difficult and expensive to apply water sensitive urban design. 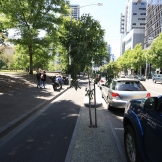 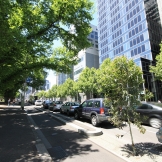 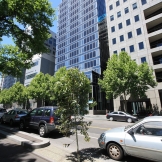 What benefits has the bicycle lane project provided?

The separated bicycle lane was installed along the full length of La Trobe Street. The stormwater capture and greening was trialled on the section between King Street and William Street.

The new bicycle lane is separated from vehicle traffic by a thin median strip. This median includes specially designed tree plots that capture stormwater as it runs off the road surface. This provides passive irrigation for the new trees. Structural soil is used in the tree plots to ensure that the water is able to filter down to the root system. 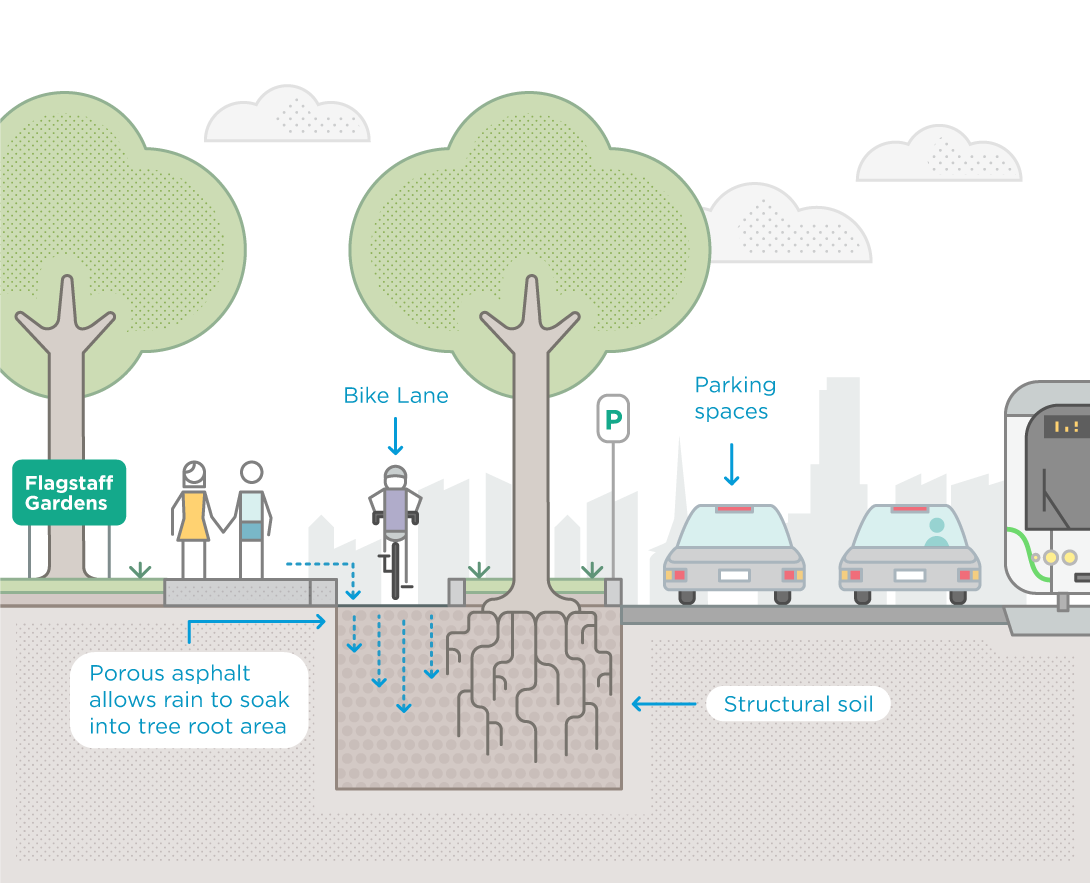 Combining many outcomes into one project has been a cost effective way to deliver on the objectives set out in several City of Melbourne strategies.

The trees and water sensitive urban design components of the median project cost a total of $110,000. 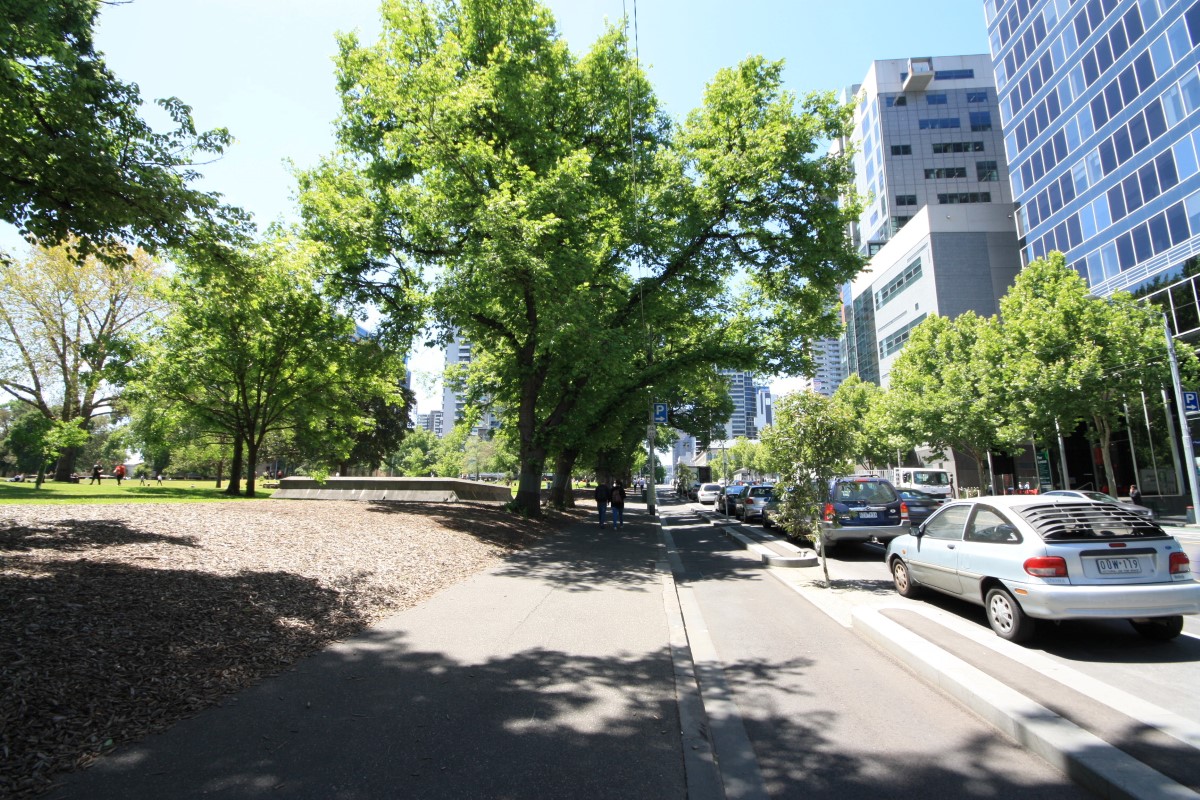 Using La Trobe Street as a test case for an innovative style separated bike lanes was an important element of the business case for this project. Innovation played a key role in the successful bid for funding.

The City of Melbourne designed and delivered this project. It received funding from the Victorian Government.

The following tasks were completed during the research and planning phase of the project:

Concept designs were developed showing the proposed separated bike lane with permeable paving and trees in the median. The designs were used for stakeholder consultations and traffic modelling.

The design involved narrowing the roadway and shifting the location of car parks, so a traffic study was carried out to understand the impact on local traffic. Although VicRoads modelling showed some minor impacts on vehicle traffic, this was offset by the positive impact on bicycle traffic.

A consultant was hired to identify any road safety impacts of planting trees in the proposed bike lanes. Recommendations were made to ensure safety, including:
• The use of ‘cycle friendly’ drainage grates
• Ensure median trees are always pruned to at least 2.4 m above the road base to maintain street light effectiveness
• Consider trees with a narrow trunk diameter

Successfully combine competing objectives
We combined different streetscape improvements into one project, rather than implementing them separately. The purpose of the project was twofold: to create bike lanes that intercept stormwater and to house trees in the areas separating bikes and vehicles.

The challenge was to design a space that maximised function without compromising functionality.

Originally, our intention was to incorporate trees into the bike lane medians for the entire length of La Trobe Street. However the presence of driveways, fire hydrants and other existing infrastructure limited the number of trees we could plant.

The only continuous row of trees we could incorporate was on the section between King Street and William Street alongside Flagstaff Gardens.

We planted lemon scented gums as they grow well in open spaces. The trees were planted adjacent to Flagstaff Gardens, with good solar access. They should grow to have large, healthy canopies.

Purpose: to provide good growing conditions for the root systems of the new trees in the bike lane median, while also supporting bike and car traffic.

Location: structural soil was installed beneath the median and bicycle lane, running from the bike lane separator all the way to the kerb (500mm deep)

Composition: The structural soil is a thoroughly combined mix of aggregate and filler soil at a ratio of 5:1 by weight.

Purpose: to allow water runoff from La Trobe Street to soak through to the structural soil and tree root systems.

Location: the porous aggregate is laid around the base of the trees and runs between the concrete bike lane separator strips. 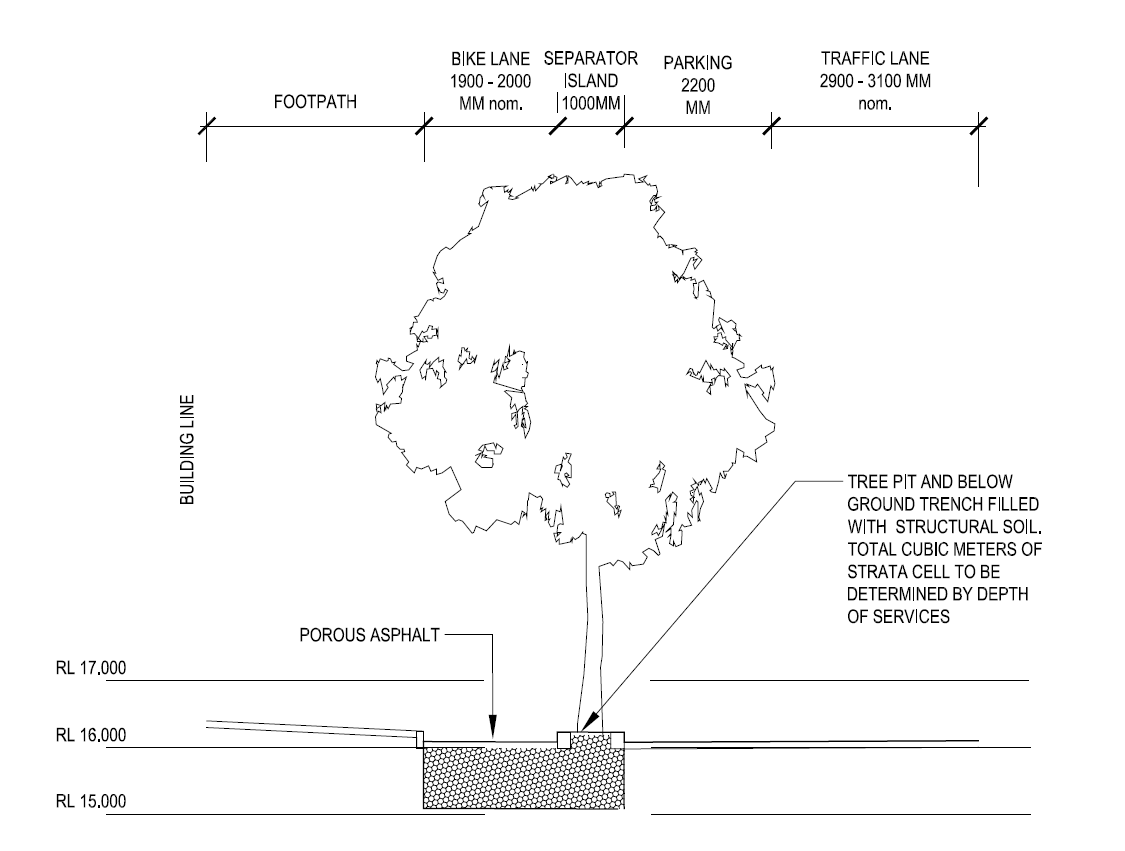 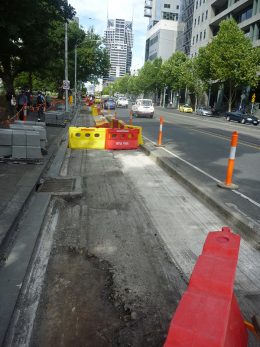 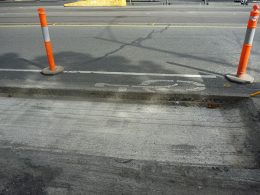 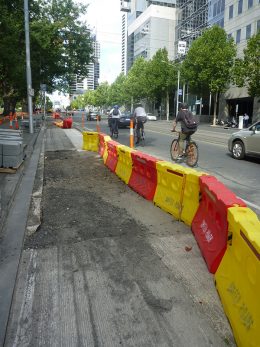 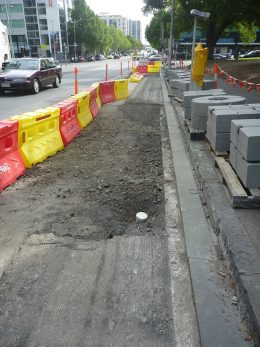 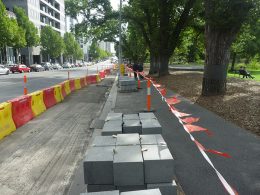 The health of the trees is the best indicator that the water sensitive urban design median is functioning well. Tree health is monitored regularly by City of Melbourne contractors.

Everything you need to know about water in the City of Melbourne.